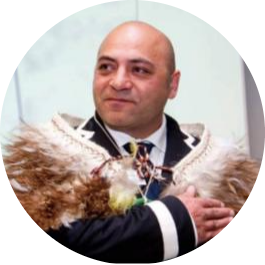 Simon is an, accomplished and decorated international athlete, company director, trustee, publisher and an enrolled barrister and solicitor of the High Court of New Zealand. Simon brings a breadth of academic training and various professional roles, combined with over 40-years’ experience, as an elite sportsman and governor. He is a four time Olympian and flagbearer for NZ at the Calgary 1988 Winter Olympic Games.

He is an active governor and currently holds roles as a trustee on various National and International Sports Bodies and NFP including trustee and board member with UNICEF Aotearoa and UNICEF’s Children’s Foundation. He is a member of UNICEF’s Audit and Risk Committee and Māori Council leading the bicultural transformation of the organisation.

His qualifications include degrees in Law and Commerce (Māori Business) as well as a Post Graduate Certificate (Level 12) in Career Counselling Psychology for Elite Performers.

He is currently at The Treasury and advises the government on all aspects of governance in relation to the Crown’s largest commercial boards including the SuperFund, Transpower, Landcorp and Infrastructure Sector boards. He was previously employed by Te Kāhui Whakatau (Office of Treaty Settlements) within Te Arawhiti Māori Crown relations Settlement and Negotiation Team and was acknowledged as a negotiator of the highest distinction.

He possesses wide networks in a range of diverse communities, including sport, corporate, government, and Māori. He has a proven ability to build strong relationships, engage with, and influence leaders.