After almost 8 years of war, Syrian children have lost everything. There is now an entire generation of Syrian children who have only known violence, hunger, poverty and disease.

And as temperatures plummet in winter, Syrian children displaced across Syria and surrounding countries are at risk of dying from the cold.

Yahya was only 15 months old when UNICEF came into contact with him.

For five years, Yahya’s family have lived in the Moniz Refugee Camp in Dohuk, Iraq. They fled the intensifying violence in Syria with little more than the clothes on their back. But their struggle didn’t stop once they reached Moniz – as the harsh conditions of the camp took its toll.

"We have been through so much. Even now, we are so scared sometimes."

"We live in a tent, but the wind and snow used to break it often. We had to rebuild it every time."

"I worry how I’ll keep my children warm this winter. Last year my brother-in-law’s tent caught fire and three children inside died. We’re so scared of having a fire now."

"Yahya was born in a clinic here at the camp, but he has been badly affected by the cold and the dirt in the air. He has lung issues. Even we suffer as adults."

"I hope my children have a better life than I've had. And wish that they don't see and suffer what I did. There's nothing left in Syria. Only war. Where would we go back to?"

"We can’t run from war and then die from the cold."

Thanks to UNICEF donors, Yahya received the help he needed to survive winter.

But right now, 1.3 million other Syrian children need our help. They urgently need warm clothes and thermal blankets to survive the harsh winter months ahead.

UNICEF is working around the clock to reach children before the worst weather hits. But we need your help to do that.

‍Will you help us protect Syrian children from the cold?

Just $61 can give a child like Yahya a life-saving set of winter clothing.

We need you. The children need you. Please give what you can today. 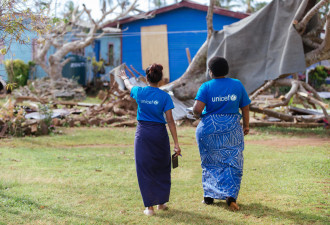