It’s hard to have a chat with someone and not mention how wet it’s been this year in Aotearoa New Zealand. And from countless countries overseas – such as Pakistan and our neighbours in Australia – news of torrential flooding has dominated our headlines.

But spare a thought for children caught up in a powerful flash flood that swept through parts of Afghanistan recently and impacted almost 16,000 people – not long after a devastating earthquake had already struck other parts of Afghanistan. This flooding has not been widely covered by media outlets, which is why we reckon it’s important to share the scale of the disaster and how UNICEF donors were able to help us deliver aid immediately.

Zabiullah lives in Logar but works in Kabul as a daily labourer, earning around 300 Afghani per day, just over $6.00 NZD. He goes home to Logar once a week. But after the flash flood, he returned to a home that had been completely destroyed. He now lives in a tent with his pregnant wife, two-year-old son, and three other children.

“My wife called me one day and begged me to come home as soon as possible,” he recalls. “She told me the flood had destroyed everything and she could not find all of our children.”

Zabiullah sits in the tent where he now lives with his children and pregnant wife. Recent floods in central Afghanistan destroyed his home and he lost all his possessions.

Zabiullah rushed home, finding nothing in his village recognizable.

Zabiullah’s children were stranded amidst the receding floodwaters. His neighbours struggled to rescue them, and one of his children was missing. They could not find him until later that evening.

“I do not care about my possessions anymore. I am only thankful that I have my children and my wife with me safely.”

For Zabiullah and many other families, UNICEF provided hygiene kits with essential items like soap, buckets, towels, and laundry detergent to keep children and their parents healthy and protected from diseases in the aftermath of the flood. UNICEF also trucked in clean water, safe for drinking, washing and bathing.

One of Zabiullah’s children, Mustafa, 8, usually attends UNICEF-supported community education classes in his village, but those were also destroyed by the floodwaters. He got lost in the flood when it forced its way through his neighbourhood.

Mustafa remembers looking around desperately but finding everyone busy with their own devastation. He could not find his mother or youngest brother, and his other siblings were trying to rescue themselves. After four hours, Mustafa was found far from his village by other members of his community.

“I want my home back, and I want to go back to school and play with my friends.”

8-year-old Mustafa is back with his family, but his home and his school were destroyed in the disaster.

UNICEF heard Mustafa’s cries and recognises the fear of thousands of other affected children. A few days after the flood, UNICEF met with families displaced in Logar Province and brought supplies for those who had lost everything.

How UNICEF donors are helping children and their parents in the aftermath of the flood:

UNICEF distributes hygiene kits to families displaced by floods in Logar Province, Afghanistan, as their villages were destroyed by recent flash floods. These kits include essential items like soap for bathing and laundry, towels, shampoo, and sanitary pads.

With support from generous donors and other supporters, UNICEF has been responding to disasters like the floods in central Afghanistan. There are over 24 million people in need of humanitarian assistance in Afghanistan – including 13.1 million children like Mustafa.

Because we’ve been working in Afghanistan for over 70 years, we were able to respond quickly. And we’re still here to support the children of Afghanistan. Regardless of natural disasters, hard-to-reach communities, or whoever’s in power, we have no plans of leaving, and we’ll never give up on the people of Afghanistan. 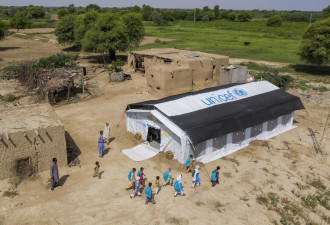