"Those least responsible for this crisis, are paying the highest price -- including the children killed and injured in a series of atrocities in Kabul since last Thursday.

"Again, today, I heard of more unsettling reports -- of unaccompanied children across the country...more reports of grave violations, including children being recruited by armed groups.

"All this in a year in which more than 550 children have been killed, and more than 1400 injured.

"This is a child protection crisis in a country that is already one of the worst places on earth to be a child.  "Against a backdrop of conflict and insecurity, children are living in communities that are running out of water because of the drought. They’re missing life-saving vaccines, including against polio, a disease that can paralyze children for life. Many are so malnourished they lie in hospital beds too weak to grasp an outstretched finger.  "These children are deprived of their right to a healthy and protected childhood.

"It is for each and every one of these children that UNICEF is staying. We have been in Afghanistan for 65 years and we’re here to deliver critical aid and enable services for those most in need.

"We’re doing it through our 5 zonal offices nationwide and our network of partners – from community elders and women’s groups to extenders and transportation companies. Companies on which we’re relying to bring supplies in from Pakistan.

"And through our willingness to embrace technology. Instead of giving communities what we think they want, UNICEF Afghanistan is using U-Report, a free, text message-based service, that enables us to ask them what they need.

"Last Thursday, over 100,000 people, 15,000 of whom are girls, told us that the most important thing we could do for them is to give them cash-based assistance. So that is one of the responses on which UNICEF Afghanistan is working. Cash gives people the power to choose what they need the most, while maintaining their dignity. And with winter just around the corner, maybe a mother needs warm coats for her children or maybe the family will buy chickens, or maybe the girls in the family need more schoolbooks.

"Because when it comes to girls’ education, let me be clear.  UNICEF has always and will always advocate for all girls in Afghanistan, including those with disabilities, to attend primary and secondary school, and go to university if they choose.

"And while vulnerable families tell UNICEF what basic items and services they need, we are concerned about headlines around international donors cutting aid to the country – not just for UNICEF but for other aid agencies as well. We are also concerned about having the safety and security to deliver programmes nationwide, especially for our female national staff.

"So, we urge all partners to support us as we prioritize our scale-up plan which includes:

"Finally, I want to finish my remarks to you as I began -- on the issue of child protection. Because this last week has amplified the imperative of protecting the most vulnerable children.  You saw many of them at the airport last week – despairing families lifting their sons and daughters over the perimeter wall; bewildered children lost in the crowd.

"When we saw those scenes, UNICEF Afghanistan’s Security team and our Child Protection team went straight to the airport. They spent night after night caring for children who had become separated or abandoned in the chaos and desperation of the evacuation. On Saturday, we reunited those children with their families. It was a practical, personal and poignant illustration of what UNICEF means when we say, “no child left behind.” 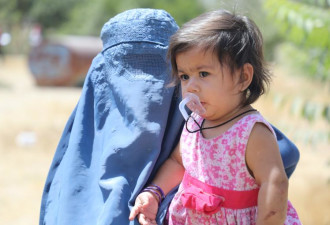